TL;DR – Use WiGLE’s built-in audio playback to improve your wardriving! Its handy information can be relayed over audio to improve strategies to collect the most networks. Go to WiGLE WiFi – Settings > Speech Configuration Screen then, from the Network List, enable audio by clicking the menu in the upper right and select ‘Play Audio’.

When I started to use WiGLE, I noticed an audio feature. Still, I found it cumbersome, so I immediately muted it. I mean, who doesn’t like listening to music while they wardrive?

Let’s get to it- if you’re not using the audio feature in WiGLE, you absolutely must! I imagine this audio feature is beneficial for those who walk and run-on city streets. Maybe it is not popular around the Midwest because most of us are driving or using transportation modes to travel quickly? At least that’s what I thought until I used it to drive around some sparse cities in Indiana. 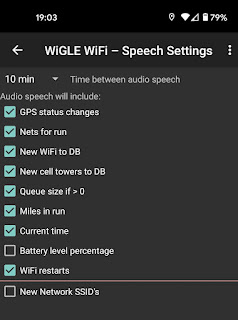 GPS Status Change: Alerts if GPS signal is lost or found
Nets for run: Readout of the number of networks are in the run
New WiFi to DB: Readout of the number of the WiFi found
New cell towers to DB: Readout of number of new cells found
Queue size if > 0: I've never had any of my devices struggle to process the queue fast enough to have a backlog. But if this occurs, it will state the number of entries left to submit to the database.
Miles in run: Report of how many miles have been traveled according to the GPS. This option is fun for working out (running, biking, hiking).
Current time: Reads time out in the format of your device
WiFi restarts: Also rare to hear, but it will alert if the network device restarts
New Network SSID's: This will read out the SSID of each new network observed.

First -  I don’t think many people use it. There are two main settings for WiGLE’s voice feature; the first set can be found under general settings. The second can be found under the speech configuration screen. The general settings are to play a lower pitch sound when a network is found in the current run. The second higher pitch sound will play when the network is new in your device’s database. The sound comparison is being made on the device’s local database, not your user database for WiGLE. If nothing is being found during the scan or if your scan is being throttled, you will hear nothing. Going down the highway, it’s common not to hear anything for a while until a cell tower is found. An almost constant sound 1-2 times per second should be heard. If the tone is only sounding every 20-30 seconds, the WiFi is being trolled.  As a reminder, you can turn that off in Android’s Dev settings. Keep in mind by default, WiGLE lowers the scanning frequency for slow-moving or standing still, but you should still be able to hear a tone every few seconds.

I have made some embarrassing mistakes on a past trip to a different state where I forgot to check if I had the correct setting disabled for WiFi throttling on Android. I thought I had set this device to previously never throttle and disable this setting. Still, I had forgotten, and I spent half of this trip with one phone that wasn’t scanning more than four times in two minutes. This throttling significantly hampered my score and my ability to do well. Oh - and the most recent other cities I had traveled to for wardriving had significantly fewer results for this reason. I had this idea that the cities I was wardriving were already well mapped, and I was doing it wrong. Still, no, it was because one of my devices had wild WiFi throttling enabled. I could have caught this if the audio feature was enabled. After I started using WiGLE’s audio feature, I could tell that it was WiFi throttling because I had the audio enabled on my next run with another new device.

So as I’m going along my wardrive, I continually hear lower and higher-pitched tones. Once I get to an area that I’ve decided I should look out for all my map, I should continuously hear higher-pitched tones in succession. The frequency should let me know that I’m doing an excellent job not over covering the area. Once they start to hear some lower pitch tones between the higher pitch tones, I’ve captured some of the networks in this area, but I still have more to go. Then, as you guessed it, once I hear an area only has lower pitch tones, I know not to go there again, and it’s already been covered. This is incredibly helpful for someone like me who is geographically challenged. I know some people can map out spaces and places in their heads well, but that’s not something me and my ADHD do, OK? Therefore I can take the burden off of properly-being efficient when I drive and rely on the tone’s sound to tell me if I’ve already mapped in an area or covering one too much going from to and from targets.

If you didn’t read from the intro: Go to WiGLE WiFi – Settings > Speech Configuration Screen; then, from the Network List, enable audio by clicking the menu in the upper right, lastly select ‘Play Audio’. I’d love it you’d let me know how WiGLE Audio works for you; feel free to reply below.

Popular posts from this blog

The problem with sensing finger magnets

September 27, 2021
Okay, I have to make this post quick, but the second part will be way worth the payoff. October 3rd I'm having one of my sensing magnets taken out that I've had for about 5 years; since Nov 2016. It's clearly rejected and when I tried to make the situation better, I made it worse.  In previous posts or tweets, I've mentioned I had a method to re-stimulate the magnet. Do not attempt. It's likely the reason it's now rejected after so many years.  Biohacking comes with a lot of risk, especially if you're afraid of needles and knives, but the benefits outweight the risks. I loved having a strong magnetic sense with both of the magnets. I love the honor I've had to have them all this time. But now it's painful to use my finger and there's a large black bulge where the magnet wants to exit my finger.  Some questions I have before cutting open: 1. How am I going to numb my finger? What method will work? 2. Is the coating or silicone broken? Any risk of
Post a Comment
Read more

How to Wardrive: Know where to go

January 31, 2022
Inspired by others, and my goal of getting a golden WiGLE badge, I went wardriving for my birthday. I was hoping for 50k, and I ended up with just over 61k. I'm less than 80k away from my goal! But how do you pick a place to wardrive, and how do you actually do  it? The easiest way is to download WiGLE on an android phone, get some transportation, and be set on your way. But if you want more detail or some tips, keep reading.  Avon Lady Method : Find a city within reasonable distance of travel Examine the results for the past few years of the area; do not use the overall coverage of all time.  Verify if the city is desirable for wardriving Little coverage in the past few years Most residential areas are not covered Use maps to search and define high density residential areas (i.e. apartments, town homes).  Create an order that allows for little overlapping and in a convenient driving pattern. Use landmarks around the city to define the internal roads Wardrive Profit ("internet
Post a Comment
Read more