Which browser do you use? Thanks for any boosts! I wanna know! 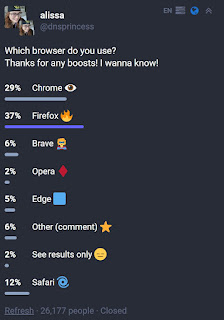 Oh cool! More internet points! I made this poll and it got some attention so I thought I'd share it.

The first 54 votes of 26,177 were erased after I edited the poll. If you edit a poll's options, such as adding one, all of the votes go back to zero. Oops. I forgot to add safari, and are large amount of people let me know. The most popular "other" answer was  Vivaldi. Other popular answers were versions of Chromium and DuckDuckGo.

While this was the final results, for a majority of the time, Firefox has a much stronger lead against Chrome. The poll started first around infosec.exchange when the lead was large, and as the poll moved around the fediverse, the gap narrowed.

A couple other comments sounded like "Why only one option" or why they picked their particular browser. I definitely got the information I was looking for. Check out the post for more replies and cool facts!

Edit 12/4: After hearing negative comments about Brave's CEO (I haven't researched this myself, so excuse any ambiguity) and all of the responses about Vivaldi, I have migrated.

Popular posts from this blog

The problem with sensing finger magnets

September 27, 2021
Okay, I have to make this post quick, but the second part will be way worth the payoff. October 3rd I'm having one of my sensing magnets taken out that I've had for about 5 years; since Nov 2016. It's clearly rejected and when I tried to make the situation better, I made it worse.  In previous posts or tweets, I've mentioned I had a method to re-stimulate the magnet. Do not attempt. It's likely the reason it's now rejected after so many years.  Biohacking comes with a lot of risk, especially if you're afraid of needles and knives, but the benefits outweight the risks. I loved having a strong magnetic sense with both of the magnets. I love the honor I've had to have them all this time. But now it's painful to use my finger and there's a large black bulge where the magnet wants to exit my finger.  Some questions I have before cutting open: 1. How am I going to numb my finger? What method will work? 2. Is the coating or silicone broken? Any risk of
Post a Comment
Read more

How to Wardrive: Know where to go

January 31, 2022
Inspired by others, and my goal of getting a golden WiGLE badge, I went wardriving for my birthday. I was hoping for 50k, and I ended up with just over 61k. I'm less than 80k away from my goal! But how do you pick a place to wardrive, and how do you actually do  it? The easiest way is to download WiGLE on an android phone, get some transportation, and be set on your way. But if you want more detail or some tips, keep reading.  Avon Lady Method : Find a city within reasonable distance of travel Examine the results for the past few years of the area; do not use the overall coverage of all time.  Verify if the city is desirable for wardriving Little coverage in the past few years Most residential areas are not covered Use maps to search and define high density residential areas (i.e. apartments, town homes).  Create an order that allows for little overlapping and in a convenient driving pattern. Use landmarks around the city to define the internal roads Wardrive Profit ("internet
Post a Comment
Read more